skip to main | skip to sidebar

TAIWAN OFFICIALS GET THE FINGER

Immigration officials said the 33-year-old, surnamed Wen, came to Taiwan on a marriage visa. She was fingerprinted upon arrival at Taiwan Taoyuan International Airport from China's Wuhan City Friday when officials noticed fingerprint anomalies on their computer screen.

Suspecting that Wen might have had plastic surgery to alter her fingerprints, officials called for help from the Criminal Investigation Bureau.

Police from the bureau used the Automated Fingerprint Identification System to identify Wen's true identity -- another woman, also surnamed Wen, who came to Taiwan in 2005 on a marriage visa but who was deported in 2011 after failing to report her whereabouts and overstaying her visa.

Wen initially denied the alleged biometric fraud, but later tests revealed that she had also had cosmetic surgery to her eyelids, nose and lips.

A California woman is looking for her big break or should I say big BUST.
Aspiring model and actress, Kali Woods, thinks that if she gets a boob job, she’ll get a big break. The 21-year-old says she recently played a bikini model in the upcoming film “Think Like a Man 2” and she noticed something about the other models.
“They were getting bumped to speaking parts and they all had really large breasts, and I noticed that, and I’m like, maybe that’s the ticket.”
Just one problem, Woods can’t afford the surgery. So she has turned to MyFreeImplants.com. The website was created eight years ago by a University of San Diego graduate and helps women raise funds for boobs.
Woods has created a profile and members who see it can donate money or send a message to her. She’ll earn $1 for each message. Members are also allowed to send private photos through the site.
She’s hoping to raise $7,500.
“I don’t think there’s any shame in it. Right now I’m a 34B; I’d like to be a D,” said Woods.
Owners of the site said there are strict rules against contacting the women offsite, which helps keep members safe.
So far the website has paid for more than 1,100 surgeries.
Woods hopes she’ll be the next BIG success story.

How costly are dog bites? The cost to the insurance industry last year was $489 million--about one-third of all the money paid out for homeowners' liability claims overall. That figure, says the Insurance Information Institute, is up more than 50 percent since 2003. The number of bite claims last year topped 16,500.
Half a billion dollars, though, does not begin to quantify the harm done by bites from Fifi, Rex, Laverne, Princess, Laddie-Boy and Buster—in other words, from dogs in toto. Toto, too? Yes, even from Toto.
As a U.S. Postal Service slogan in support of National Dog Bite Prevention Week says, "There are 70 million good dogs, but…ANY DOG CAN BITE."
And whom do dogs most often bite? Toddlers. Next, the elderly; and coming in third--you guessed it--postal carriers.
"Dog bites are the ninth leading cause of unintentional nonfatal injury to children ages 5-9," Kathy Voigt, president of Prevent The Bite, tells ABC News. "More than 2 million children are bitten by dogs every year, and most bites are from their own dog or a dog they know well. The majority of bites to smaller children are in their face and head." 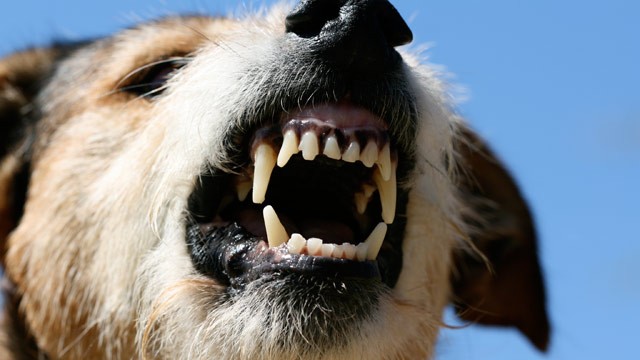 The scenario that keeps Emily Patterson, animal welfare scientist for the American Veterinary Medical Association, awake at night, she says, is a very young child left alone with the family dog. Children are easy to injure, she notes. They tend to do "surprising things." And dogs, she notes—even the nicest and most loving ones—do not always respond well to surprises. Somebody pulls your tail while you're asleep? You bite.
The Insurance Information Institute says the most expensive claims are ones involving young children disfigured by a bite: Your neighbor's child comes over to your house to play, is bitten, and needs reconstructive surgery. Though the number of bite claims has not changed much in the past 10 years, costs have risen because medical care costs more.
According to the American Society of Plastic Surgeons, there were close to 27,800 reconstructive procedures, including ones for children, to repair dog bites in 2012.
Most homeowners' policies, says the Institute, provide liability coverage of $100,000 to $300,000. If the claim exceeds the limit, the dog owner is responsible for all damages above that amount, including legal expenses.
Most insurance companies insure homeowners with dogs, according to the Institute. But some charge more to people owning breeds that an insurer may regard as bite-prone, such as pit bulls and Rottweilers. Some cover the owner only if the dog is taken to behavior classes or is restrained in public with a muzzle, chain or cage. Others deny coverage altogether.
Patterson of the AVMA calls insurers' singling out certain breeds misguided. The data, she says, do not bear out the contention that one breed is more apt to bite than another, though she allows that big dogs, by virtue of their size and strength, may do more damage when they bite. "A Great Dane, a retriever can do a pretty good job of biting, if they decide to." But if you look at "willingness to bite," she says, there's no evidence that pit bulls, for example, are more dangerous than Pekinese. "Communities with a lot of pit bull bites are communities with a lot of pit bulls."
Still, she says, her own apartment building does not allow tenants to keep breeds it deems especially dangerous, including pit bulls, Akitas and Rottweilers.
Posted by E. Bradley Garber MD FACS at 3:21 AM

E. Bradley Garber MD FACS
Tulsa, Oklahoma, United States
I was born in New Orleans. I obtained my B.A. degree with Distinction and Phi Beta Kappa Honors from the University of Colorado. I obtained my M.D. degree from L.S.U. Medical Center. I completed a 5 year surgery residency specializing in Otolaryngology and Head and Neck Surgery in Denver Colorado. I served in the military and spent two years in Germany at Landstuhl Army Medical Center. From 1983-1985, I trained in Plastic and Reconstructive Surgery in Miami, Florida under world renowned plastic surgeon, Dr. Ralph Millard. I have been in solo practice for over 20 years performing cosmetic and reconstructive surgery. I have obtained Board Certification by two boards recognized by the American Board of Medical Specialities: The Amercian Board of Plastic Surgery and the American Board of Otolaryngology/Head & Neck Surgery. I have served as President of the Tulsa County Medical Society and Chief of Surgery at St. John Medical Center. It has been an honor and priviledge to provide surgical care to my patients. email: bradgarber@sbcglobal.net